The engine was built in July 1895 by Baldwin Locomotive Works of Philadelphia, Pennsylvania for the Florence & Cripple Creek Railroad at the cost of $8001.30. The boiler construction number was 14352. The F&CC named it the Elkton (#3). It was one of twelve Consolidations of the same class built for F&CC. The Elkton served the Florence & Cripple Creek for about 17 years. After the flood of 1912, the F&CC was financially unable to repair its roadway. The #3 was isolated at Canyon City and then put into storage at Colorado Springs, after the F&CC closed down in 1915. The Elkton and her sister engines sat derelict until 1917 when five of them were purchased by the D&RG. D&RG bought a sixth sister in 1920. The engines were loaded aboard D&RG flat cars and moved to the D&RG Burnham Shops in Denver, where they were repaired and upgraded to help meet the increased transportation demands of World War I.

When the engines were put into service the F&CC #3 became D&RG #425. After the reorganization of D&RG and its merger with the Rio Grande Western in Utah in 1921, the railroad became the Denver & Rio Grande Western. The locomotive was called D&RGW #425 for a short time; following the reorganization, many locomotives were renumbered to bring order to the locomotive classes, and D&RGW #425 became D&RGW #315 in January 1924.

The 315 was first assigned to the Alamosa Division as a freight engine, where it was known to be in Chama around 1921-22 and in Durango around 1928. It was leased to the RGS for a period in 1926-1927. It was on the Gunnison Branch in 1929 and idle in Salida for a few years after the stock market crashed and again in the late 1930s during a recession. It served the Ouray Branch out of Montrose 1933–1936 and again during 1939–1941. By the early 1940’s, as bigger locomotives came on the line, many of the smaller 2-8-0s were either being scrapped or used as yard engines. In March of 1941 the 315 was sidelined for a few months. It was taken to Alamosa for repairs during September and October, then sent to Durango to become a yard or switch engine. At this time, it gained a rear light and had the road pilot replaced with a switchman platform. It was shopped again in 1945, receiving new flues and other major work. 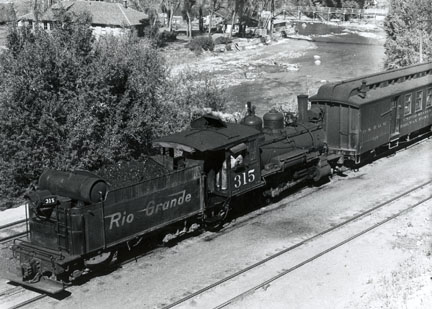 When converted to a switch engine, the cowcatcher was removed. Handrails and switchman platforms were added to the front and back of the locomotive, along with a backup light to the tender, and a tool box on the cab roof. Courtesy Colorado Railroad Museum

In 1948 the 315 was used in the Warner Brothers movie, Colorado Territory. When released in June 1949, it was the first of many films made by Hollywood in the Durango area, which saved the Silverton Branch line through tourism. The 315 remained in service in Durango until October 1949.

Jackson Clark and the Durango Rotary Club saved the 315 from being scrapped by convincing the D&RG to lease it to the city for display. The 315 was placed in Brookside Park on North Main Street in September 1950. Before being put on display, it was backdated by the D&RGW shops to resemble an engine of the 1870s era. This included the addition of the funnel stack, kerosene headlight and wooden cowcatcher used on the Emma Sweeney (RGS #20) in the movie, Ticket to Tomahawk. In 1956, the 315 became a Hollywood star again when Warner Brothers used it in Around The World in 80 Days. During the making of this movie, the engine was pushed by a diesel locomotive disguised as a baggage car because the 315 was no longer in operating condition. To make steam, the water legs were cut out of the tender to make room for a steam generator. Hoses and pipes routed the steam to appropriate points. Oily rags in the firebox created plenty of black smoke. 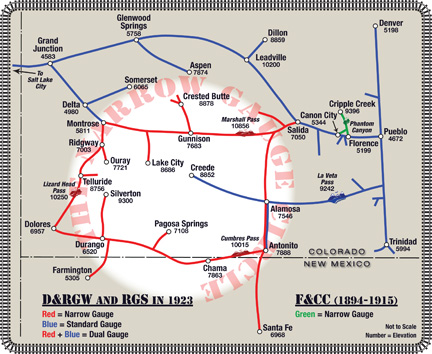 The 315 as the Jupiter in Around the World in 80 Days, shot near Durango in 1955. The funnel stack, kerosene headlight, and pilot (cowcatcher) and link and pin coupler are movie props. No longer operable, the 315 was pushed by a diesel disguised as a baggage car behind it. Smoke and steam piped from generators in the tender supplied the effects in the engine. Courtesy Center for Southwest Studies

When the D&RG was getting ready to abandon the Durango to Alamosa line, the 315 was donated to the Chamber of Commerce in 1968. In 1986 the 315 was moved to Gateway Park, now Santa Rita Park, to be near the new visitors center.

Since being displayed in a park the 315 received numerous coats of paint and lost a number of parts. In October 2000, at the request of the DRHS, the locomotive was granted a historic landmark designation by the City of Durango. In December 2000 the Chamber of Commerce transferred ownership to the City of Durango.