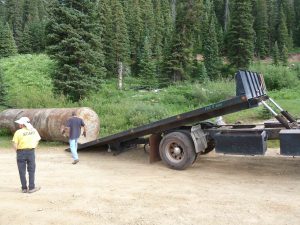 s ago when DRHS board member Duane Danielson and Bob Shank Sr. were taking a jeep trip over Bolam Pass. It was hidden in weeds fourteen miles up the hill from Purgatory Ski Resort, next to the Graysill Mine. The discovery opened up a discussion of what it was and how it got there. It was clearly a railroad tank though the rest of the car, like the frame, trucks and the rest of the items that makes up a complete car were missing. That made sense as there were no railroad tracks to Bolam Pass although a survey had been carried out in the area many years ago.

After much research we discovered that the tank car originally came from the Vanadium Mill, 10 miles south of Placerville, CO. Primos Chemical Co. operated the mine during the early 1900’. Initially we believed the car was used to haul gasoline from Montrose to the mil l but subsequent evidence from Dave Grandt proved this not to be the case. He says that this is  one of the cars used to haul oil from Salida to Vanadium to fire the mills roasters. The tanks, which were owned by Primos were fixed on D&RG owned 6000 series flat cars. Those known to be converted were 6001, 6039, 6056, 6069, 6077 and 6086. Dave Grandt believes that all of the tanks were removed and the flat cars returned to regular D&RG service prior to 1920. By 1920 the Vanadium Corporation of America had taken over, and intensified the operation to the extent that during WW2 over 2300 carloads of vanadium and uranium concentrate were loaded at Vanadium and taken over RGS rail to be refined at the Durango Smelter.

After WW2 vanadium and uranium was discovered at Graysill, three quarters of the way over Bolam Pass. Needing a water supply for the camp, Vanadium Corp. commandeered the old tank car from Vanadium and hauled it up the hill to Graysill Mine which operated from 1949 to 1960.

The tank has two unusual features – diamond shaped rivets and flat ends. We were able to use these two features to date the car as they were only incorporated for a short space of time before being outlawed. Our research dates the car back to the 1890’s making it the oldest surviving narrow gauge tank car in Colorado today.

After discovering the tank, Duane began negotiations with the US Forest Service to obtain ownership for the DRHS. After three years of unsuccessful efforts he connected with Julie Coleman of the US Forest Service who was able to cut through the red tape and the DRHS finally became the owner of the tank last fall. This July, Duane contracted with McKnight Towing to bring the tank down off the hill and store it behind the Silverton Northern engine house.

This video shows how the tank was recovered from the forest. 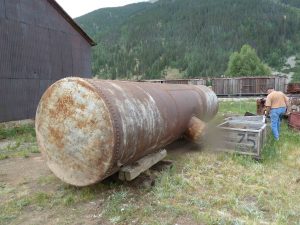 Duane and a group of volunteers plan on replacing the running gear and restoring the tank to original condition when funds become available. If you can help with the funding of this project please click the ‘DONATE’ button below. And thanks….. Video: courtesy Marc Saphir, Photos: Duane D. Danielson