The source for the 04000 Box Outfit cars came from 4000 series revenue boxcars some of which were new while others were rebuilds of earlier cars. They date from 1884 through to 1902, 400 of which were built by the Ohio Falls Car Manufacturing Company of Indiana at a cost of $545 each. Two years later the D&RG ordered what was to end up as the biggest single class of box car. Numbered 3000 – 3749, these were 30’ cars with a capacity of 25-tons. These were the cars that ended up in revenue service at the end of operations in 1968 and a number are still in use on the D&SNGRR and C&TSRR.

As older work cars came to the end of their life, the D&RG started to look at replacements. According to one source, possibly the largest number of cars were transferred from revenue to work service on 30 September 1914. By 1923 the number of work cars including 04000 series cars had jumped from 45 in 1909 to 183, increasing to 189 the following year.

The format was varied. Accommodation cars including Kitchen, Dining, Bunk and Living normally with alterations such as the addition of windows and replacing the main side doors with siding and smaller doors made up the majority. Heating was added in the form of coal stoves and some of the kitchen cars had vents in their roofs.

Many cars were used for storage of tools and other equipment and these were left plain. A number of 04000 cars were pre-made into specials trains such as water service for water tank and supply servicing, as part of rotary trains, or wreck trains. Close to the end of operations in 1962 there were fifty-seven work cars left. They included two rotary snow ploughs, a pile driver, derrick, eight flangers, eight water cars and thirty-six other cars including 04000 series box cars and 06000 flat cars rebuilt for special service such as block and tie work. 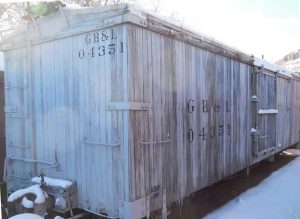 The D&RGW had a number of pre-made trains known as ‘Wreckers’. The Alamosa Wrecker was the biggest. According to company records others were in Salida, Gunnison, Durango and Chama, the smallest with just two cars: Tool Car 04351 and Rail and Tie Car 06084, which has also survived.

Tool Car 04351 is listed as reassigned to work service on 9/30/1914.  The 1920 ICC Valuation Survey listed it as a boxcar caboose. It replaced Tool car 04909 in the Chama wrecker on 1/1/27, and the portable lighting equipment and 50-ton jacks were transferred to it. The car remained there until the end of operations in 1968 when it was sold for scrap to Floyd Reed Company but was later bought by Lindsay Ashby.  It is one of the cars that has remained close to its original appearance as a revenue boxcar. 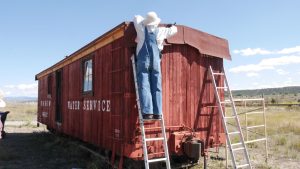 Another car that entered service in 1914, Bunk Car 04432 was inspected by the 1920 ICC Valuation Survey at Alamosa. It was a bunk car used in Water Service, was teamed up with Tool and Material Car 04904, and was the living quarters for Water Service crews who maintained water supplies along the line. These two cars worked between Alamosa and Durango as well as to Silverton. It is a representative of bunk cars with three windows, two doors and a stack for the stove.  Like Tool Car 04351, this car was sold for scrap to Floyd Reed Company in 1968 but was later bought by Lindsay Ashby. The companion car 04904 survives on the Cumbres and Toltec Scenic Railroad.

To read about the restoration of Box Outfit Car 04432 click HERE.

D&RGW Tool Car 04351 awaits restoration. A decision on a gran to help fund the work is expected shortly.

Please consider making a donation, no matter how small to help preserve these Historic Cars.