Gondolas, second only to boxcars as the most common railcars for hauling general freight, are symbolic in representing historic Colorado narrow-gauge railroading. Their roles in supporting the mining, railroad, agricultural, and construction industries contributed to the development of southwest Colorado. D&RG had about 3,111 gondolas of 22 different Classes or types.

D&RG(W) hauled more coal than any other material, so the cars now called gondolas were originally called coal cars. The first D&RG coal cars began as construction flat cars that were used in the early stage of building the railroad. The construction flat cars were 17-feet long on two axles with a 10-foot wheelbase, weighed 2 tons, and hauled 5 tons. They were converted to stone cars by adding single planks on the sides and to coal cars by adding more planks to create higher sides.

D&RGW 1400 is one of 250 gondolas in Class 14 built by American Car and Foundry in July 1902, numbered 1250–1499. At the same time 250 Class 13 gondolas were also built by American Car and Foundry, numbered 1000–1249.  Cars in both classes were 32-ft long and hauled 25 tons. The differences were that Class 13 had a 24-ft 3-in wheel base compared to 21-ft 7-in for Class 14, and Class 13 had a solid floor, whereas Class 14 were dump cars with doors in the floor between the middle five of the nine equally-spaced stakes. (Note that some had ten stakes, not equally spaced, as shown in the photo below; the tenth stake was probably added during rebuild to strengthen the middle of the car.)

In 1923 both Class 13 and 14 were rebuilt and converted into high side gondolas by adding another board on the sides, and Class 14 cars lost their dump doors. The wheelbase for both became 22 ft 2 in. The classes were merged into one.

Cars of this type hauled freight that did not require the enclosed protection of a boxcar, e.g., machinery, lumber, and bulk materials such as coal, ore, and scrap iron.

Side View. We had hoped that much of the wood could be saved. Photos George Niederauer (July 2008 Tacoma) 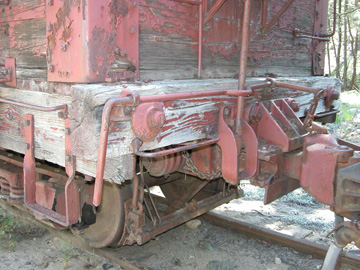 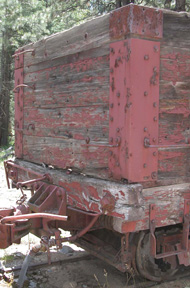 But closer examination revealed widespread rot. In the end most of the wood was replaced but the hardware was saved.